I built a portfolio full of melanated goddesses with creamy brown skin tones embracing their femininity and power. I love making art that makes my sisters feel good about themselves.

Andrea Furtick’s tarot deck – The Afro Goddess Tarot Arcanas – is “a melananted yet modern, traditionally inspired tarot deck, hand painted with the pure intentions to be the deck of the melanated Goddess’ dreams”, currently fundraising on Kickstarter. In this guest post, Andrea shares the story of how she was guided to create this empowering deck. 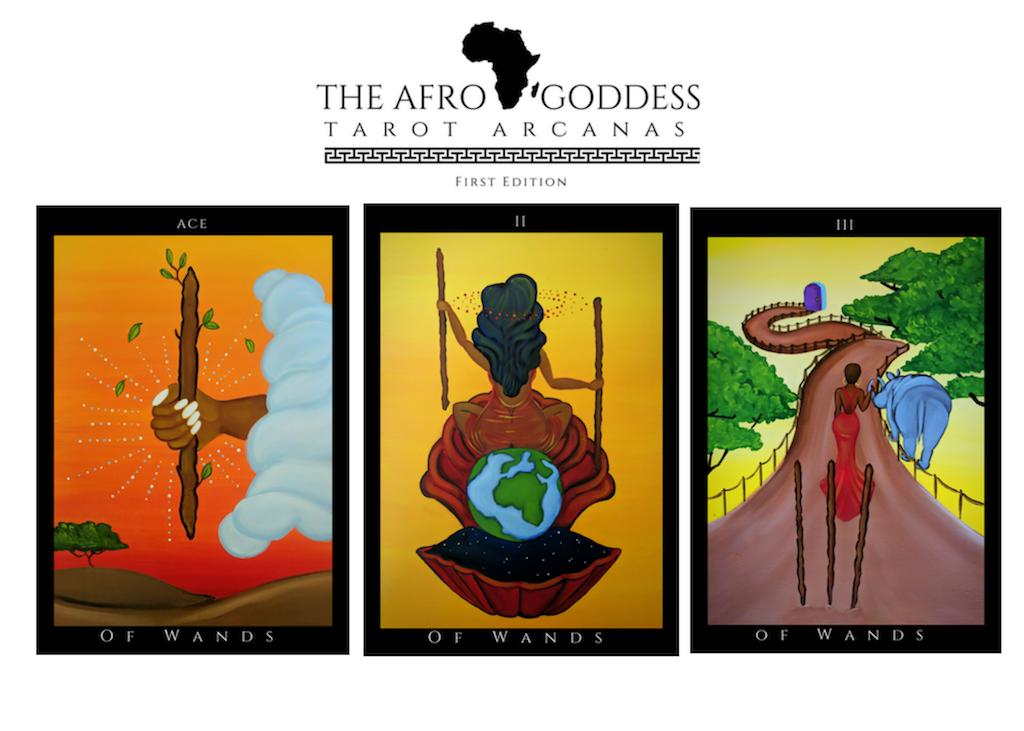 “Now this is the story all about how, my life got twisted- turned upside down, and I’d like to take a moment, just sit right there…….” well, I have absolutely nothing relevant to rhyme with that. lol.

Anyways, this is the story of how the tarot and I met and joined forces to will into existence the dreamy and hand-painted Afro Goddess Tarot Arcanas deck.

I wish I could say I came from a long line of herbalists, lightworkers, and eclectic witchy women who passed these skills down from generation to generation to me, but unfortunately that is not so. Instead, I like to think the story is kind of interesting, because I really didn’t choose the tarot, the tarot chose me.

So, when I was four years old, at my preschool graduation, I stood up tall and said, “When I grow up, I’m going to be an artiste!” (Yes, I was fancy; and stressed the “-tiste” lol) Everyone giggled, as you would at a child’s creative dreams, but fast forward to high school graduation, and those giggles had turned into some of the most confused and non-supportive faces that I’d ever seen. But being the flower child and budding wild woman I was, I went on to art school. So there it was, I was on the way to being an artiste… NOT.

I failed miserably at the college life for a multitude of reasons. And then I fell into the matrix of life, because when a truly creative person can’t create, they die a little inside; as did I.  It was here I’d given up on my artistic dreams, but apparently this failure was by divine design. I had to live. I had to learn. I had to fail. The most beautiful things grow from the ugliest places, and I am most definitely a rose that grew from some thick ass concrete.

I built a portfolio full of melanated goddesses with creamy brown skin tones embracing their femininity and power. I love making art that makes my sisters feel good about themselves. That positive vision of yourself is so important, and that’s the reason I’ve never gotten into painting famous people or popular things. In conversation with one of my Christian relatives, they openly passed a pretty harsh judgement on the lovely art I create; proclaiming it was “of the occult.” Now this hurt me, because all I do is help people feel better about themselves and I couldn’t understand how she could find wrong doing in that. It was that night, hurt and armed with too much wine, I created the vision Self: An Expression.

That piece was my ode to the strength in being a conscious, witchy black, and proud woman. And with the new found confidence that I found in creating that piece, I understood my art was being led into a more spiritual niche.

In focus of the spiritual strength, I began to create a small collection of tribal warrior goddesses that seemed to catch attention of many of black woman across the world.

Here I ended up meeting a woman named Melissa, of London, on Facebook. (At this point, I am also really starting to grasp the concepts of vibrations, energy, and intuition.) Melissa messaged me one night and explained to me that she had seen in her reading that if I were to create a deck of modern Afrocentric tarot cards it would be very profitable. Now, at the time, the profit I thought I wanted and needed was financial, as we all know the struggles of the starving artist and how up and down this business can be, but never did I imagine the “profit” that I have actually received.

As I begin to study each card one by one, I notice that I seem to literally feel whatever message the card that I am creating at that moment conveys, as my life events reflect it until I move on to the next. I began with the ever optimistic, ill informed, and ill prepared Fool. And that’s exactly what I was. I created this elaborate plan, some parts of which even by around card 12 of 79 (there’s an addition card), I then knew won’t work out. I was optimistic, but a Fool. The week I created the Empress, I was feeling amazing. I was feeling so creative and strong, it was awesome. But once I reached the Chariot card, I felt like I was having to find balance in my art and home life responsibilities, as it was getting very overwhelming and it was time to take control and create that harmony.  The week I created the Hermit card, I had to be alone. Solitude. I didn’t really talk to anyone, in attempts to heal the suffering from an immense amount of anxiety I had been experiencing lately in the face of deep personal reflection. However, I’m happy to say I understand there are highs and lows to everything, much like one of my favorite cards, The Wheel of Fortune.

So the bottom line is, I was the Fool on “The Fool’s Journey,” and I was dedicated to completing this journey of personal growth for both you and me sis.
Somewhere around the Hierophant card, I received a lovely email from a seasoned tarot reader in New Orleans. He told me I had been “commissioned by the ancestors.” To say that’s the most beautiful compliment I have ever received in life would be an absolute understatement. And when I read it for the first time, my entire body got chills. And if that be the case, as I’d like to believe it is, I am so hella-honored that they chose me.

So that’s it. That’s how a small town, Christian raised but never rooted, black wife and mother of two decided to create a deck to change the perception of black women everywhere.

The Afro Goddess Tarot Arcanas deck is now currently LIVE on Kickstarter until September 24th. It could absolutely use your support to manifest!
Find out more or preorder your deck right here.