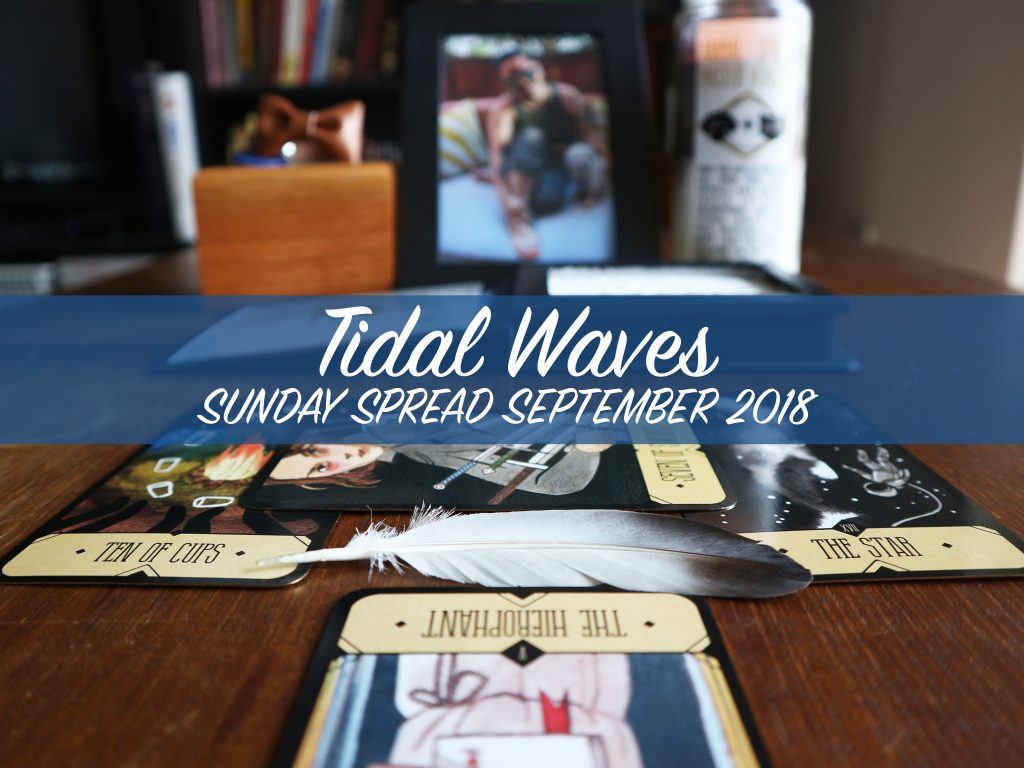 Hello, my loves! Can you believe we’ve spent a whole year of Sundays together?

It’s been quite the journey. I can’t tell you how much I appreciate this space and all of you who have visited. Whether you’ve lurked around the edges or commented and questioned, heck, even if you’ve given my amateur spreads a side-eye, thank you. My time here blogging with Little Red Tarot has been the loveliest gift, and I want to thank each and every one of you for being a part of the Sunday Spread!

I started this blog series with a post entitled: Ring of Fire. Together we contemplated how to sink into the final few weeks of summer, and lean into the heat without going up in smoke. A year out and I can’t help but laugh/sob at the inevitability of cycles.

I had been planning for a few months to do a post for the one-year anniversary around the theme of water. Something to balance the fire we started with last year. Cycles, waves, tides, there’s got to be something there, I thought! It seemed like the perfect reminder as we circled back around to August. However, you might have noticed that it is, in fact, not August but September. A month later, with the illustrious gift that is Little Red Tarot evolving and the blog coming to a close, I can’t help but be struck by the inevitability of cycles, just not the ones I particularly expected.

Last September, for my second post ever on Little Red Tarot I wrote about grief. I contemplated how we could “let go” so that we could “level up.” And as I started to prep my one-year post I found myself tested as to whether or not I had really integrated all of these lessons. I once again found myself in the midst of multiple losses, of both lives and expectations, and the wave metaphor I had begun to craft started to feel like I needed to add “tidal” to the front of it.

Just as I was starting to catch my breath after the first set of waves, I had to say goodbye to my sweet pup. Literally, my road dog for the past decade or so. All those losses I talked about last year, he saw me through them all. He’d been an old man since the day I adopted him and I had contemplated his mortality often, especially, in the last few years as he slowed down. Still, I wasn’t ready. I guess you never really are. And in the wake of recent losses, I had the selfish realization of how different grief felt without him sitting in my lap catching my tears in his whiskers.

He, of course, as a wise not-human species, was ready. I feel so lucky to know very clearly that it was his time, and even though I wasn’t ready, I knew that he was ready to go. He waited just long enough to give a last set of cuddles to those near enough to visit. I was struck by the calm of my young niece who held my little stinky furball gently and quietly while we bustled about, tears welling up in our eyes, trying to get an appointment with a vet on such short notice in the midst of a heat wave. Apparently, it’s a particularly busy time of year for just such losses and I’ll be forever grateful for how patient and kind the folks at the emergency clinic we went to were even though they didn’t know us.

Our cats also knew. There’s this lore in my family which I actually didn’t remember until a week later when I found myself jet lagged but grateful sitting outside of a rehab center in Oahu’s Palolo Valley, contemplating mortality, while my mom and aunty “talked story.” They recounted how the day my grandfather died, my grandma had been trying to find him. When he came in from the front yard and she demanded to know where he had been, he swore that he had been outside in the yard the whole time. She alternately swore that she couldn’t see him from the window looking out into the yard or in the couple of times she had come outside to look for him. It was like he was gradually fading away. The couple of weeks before Scooter passed, my partner and I had been noting that the cats seemed to look right through him, doing everything but walking into him, when normally they gave him a wide berth and discerning eye as he bumbled around the house.

Everyone was ready but me. 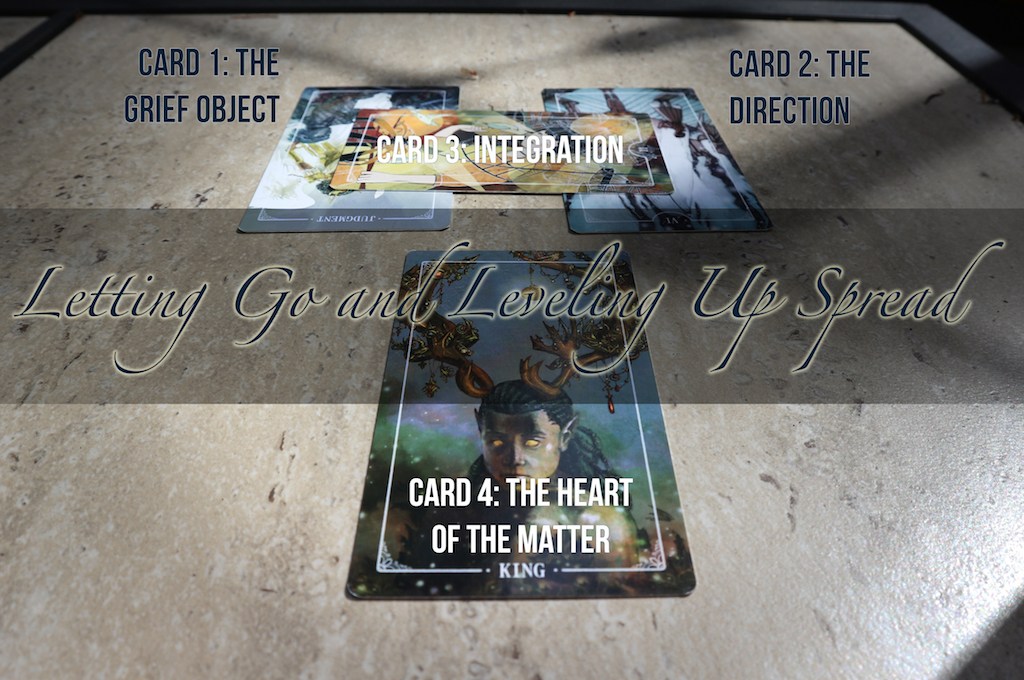 So, in honor of cycles, as we say goodbye to the blog, I thought it was only fitting to return to my “Letting Go and Leveling Up” spread from last year.

Sometimes the simplest, and most profound, tip is a reminder that we have all the tools we need if we only remember to take them out when we need them. I knew I was attending to my little guy being gone but what kept me from being ready for him to go was really inviting my grief in and letting it take up space. 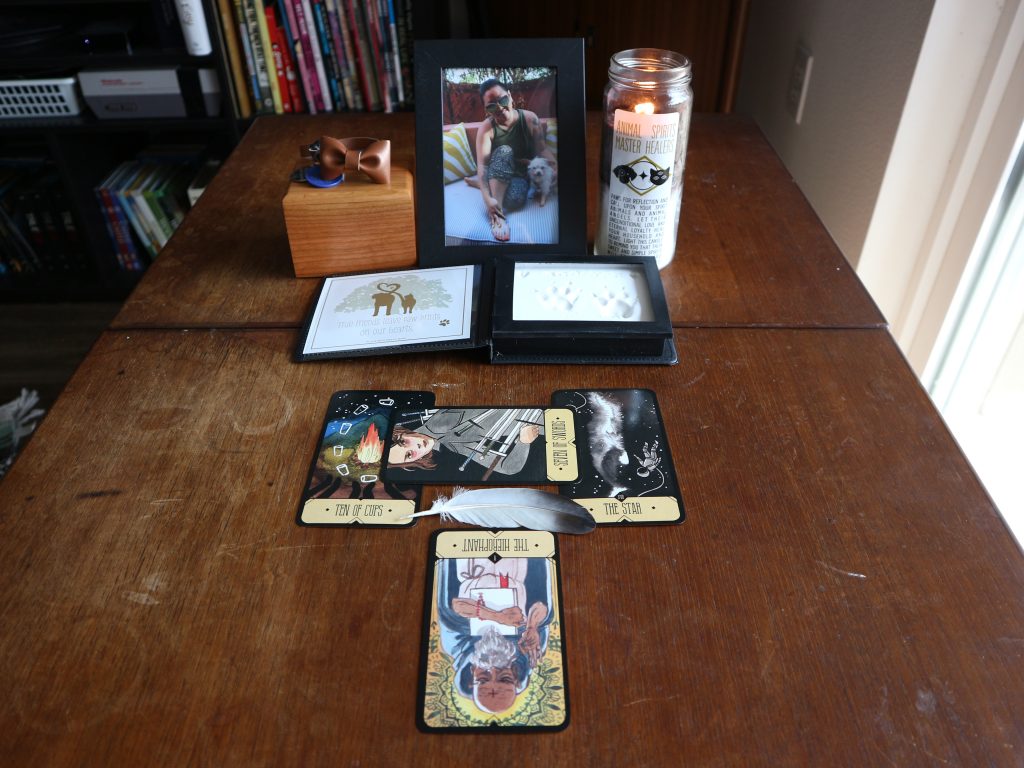 Returning to this spread ended up being exactly what I needed. I had a good cry, sat with all the lessons, and contemplated how I could truly honor the amazing gift of having this little fur baby in my life for so long as I also released him to his next well earned adventure. Ironically, or exactly as the universe would have it, I find myself writing these last few sentences at the airport heading back towards the Pacific Northwest where I was when I wrote my post last September. And not only will this mark 12 months worth of posts but also the last entry in this series. I guess if I was looking for cycles, they’re not going to get any clearer than that.  Like grief, the past year has been anything but simple, but I’m so grateful for all the time and tips that we’ve shared together as we’ve gone through it. 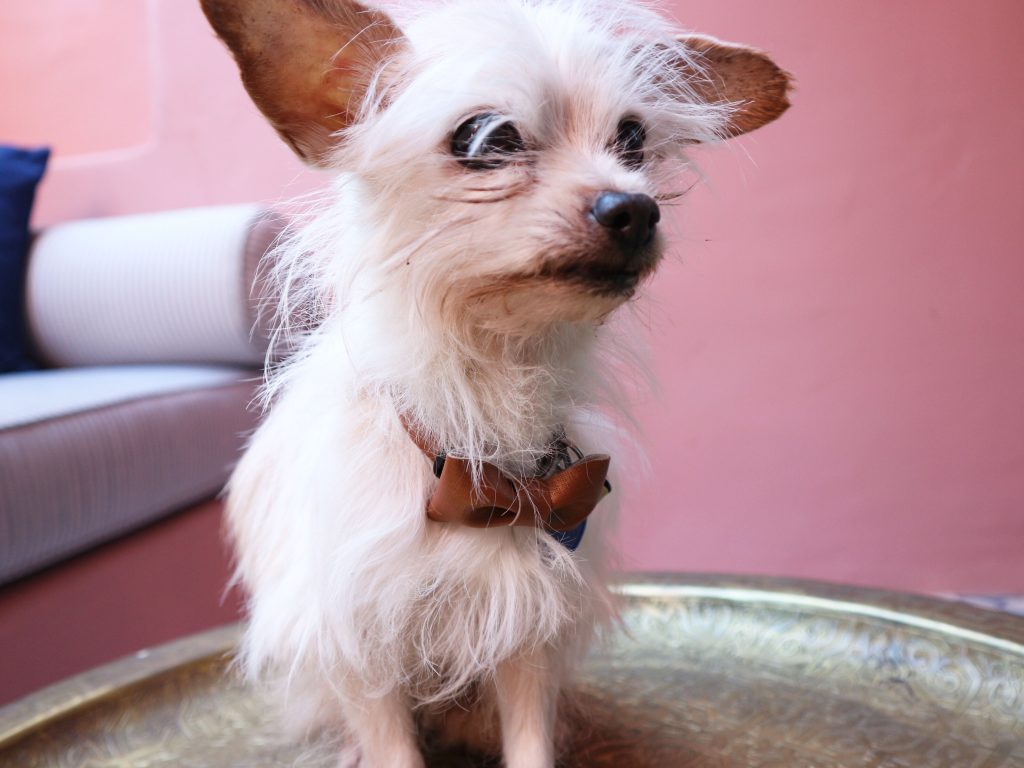 I’d like to dedicate this one-year anniversary post to all of you who have shared space at the Sunday Spread table, to Little Red Tarot as it evolves into its next big adventure, to the growth we can find when we voluntarily swim in the tidal waves of grief and, of course, to my little road dog, Scooter Lionitus Medeiros-Bagan, who has taught me so much about accepting cycles with wisdom and grace. I miss you, buddy.

With love, compassion, and gratitude,

Sunday Spread: Simple Tips for Not So Simple Lives is their offering to this wonderful alternative playground of tarot. It will be filled with a monthly collection of simple self-care ideas, intentions, and rituals for the beautiful chaos that we call life.