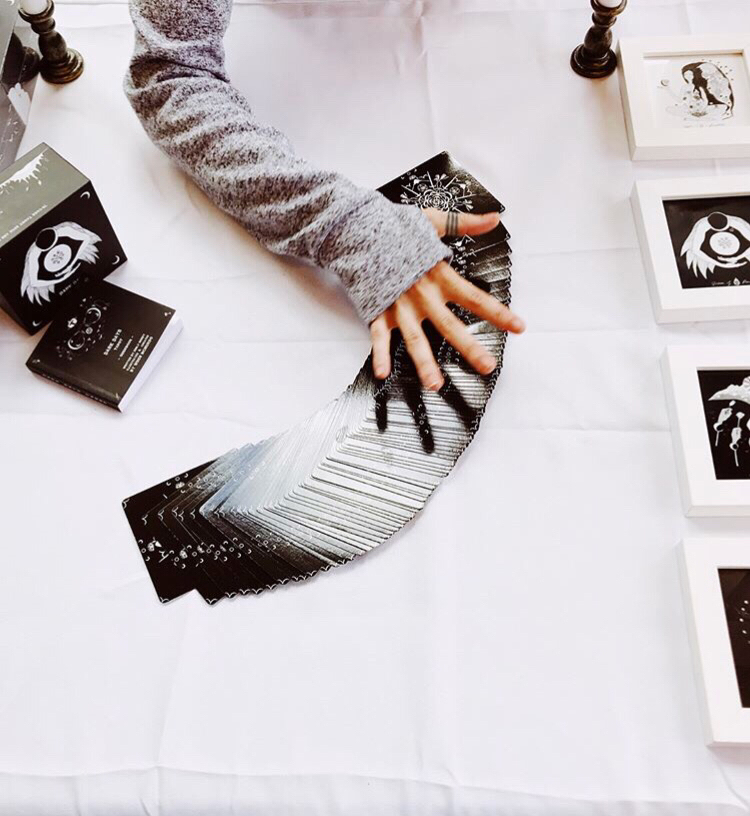 The following is a summation of the questions received when I prompted social followers with:

What do you want to know about me, Tarot or Dark Days?

What drew you to Tarot?

About eleven years ago, heartbreak spurred me to study meditation. Months of deep meditating led something inside of me to “remember” magic. I began to study magic as a solitary witch. I was a witch before I became a serious card reader, and even though I knew of Tarot prior to becoming a witch, it was witchcraft that led me to rediscover Tarot as a tool of the craft.

The structure of the deck is influenced by pagan ritual. The suit of Swords is associated with fire and Wands are associated with air in the Dark Days Tarot Deck because that’s how I learned to practice magic.

I got to know Tarot quite casually, long before I discovered that I was a witch. My first deck was a gift—the elemental Osho Zen Tarot deck. I pulled one card each day from that deck for several years before I took a deeper interest. I used the deck then as I do now: mostly for help with making choices. I didn’t study the cards for memorization; I simply studied the images and guidebook captions in connection with my life, looking for synchronicity and honing in on intuitive clues.

I progressed toward larger spreads with more cards on the table. I practiced by myself and eventually with loved ones. I didn’t actually start reading cards professionally until I created Dark Days Tarot. In fact, it wasn’t until I interpreted the cards for myself that I truly understood them.

Do you read reversals?

I do. Tarot is a study of synchronicity, so every detail counts. However, I’d suggest beginners avoid reading the directions of cards unless they’re ready and inspired.

I can’t help but read reversals when I’m using a rectangular deck. I let them hold negative energy if they need to. They can reflect warning, which can be more confusing and threatening than helpful. This is partially why I designed a square deck.

When I’m using the Dark Days and other square Tarot decks, I read reversed cards as “dark moon” cards. I’ve found this gives any funny reversed energy space to exist without stagnancy.

Instead of getting stuck in the binary of upright and reversed, a dark moon card offers punctuation to a scenario; a point of departure. Whether the card’s energy is coming or going is up to you.

Please explain how to read all four directions. I’m confused.

There are truly no such rules as to how to read each direction, or Tarot cards in general, to be frank. Guidebook interpretations are meant to be used as prompts when needed, and each reader is encouraged to find their own individual style. Originality is magic.

It is very useful to realize, first of all, that an upright card is original. The top of the card points up when the writing on the card is upright. Consider the top of the card the chevron of the arrow, pointing the way.

Four-direction cards can generally be read in three different ways:

I recommend that all readers begin by simply asking the cards a question, shuffling one to three times, pulling a card from the deck and studying the image on the cards as though it were an answer to your question (which it is).

See if you notice anything in particular about the image. Consult the guidebook as needed for inspiration. Fact: you do not necessarily need to know traditional meanings to read Tarot cards.

What inspired the square formatting of this deck?

I find myself flummoxed by reversed cards on traditionally shaped decks so created a square deck in part to appease my desire for non-binary readings. I read by lunar phase, both literally and/or metaphorically. I also read by cyclical placement. It’s an easier format for my intuition to digest.

Do you have a favorite illustration from the deck and why?

I think the Devil is my favorite card in the deck. I have always found the villain in the story to be the most interesting, particularly when the hero of the tale is that very entity. Denial is a particular thorn in my psyche, so this card helps to keep that part of me in check. I tend to delight and groan simultaneously when it appears in a reading because it means I get a chance to restore integrity. If I don’t, it will likely haunt me or become denial/cognitive dissonance.

What card came with the greatest ease? Which one was blocked?

The Lovers – Major Arcana #6 – was the easiest to conceive of, probably due to the queer femme sexual current that seems to run through my creative process. I have noticed how the sky opens up in the midst of orgasm, so it was easy to see the Lovers’ energy in connection with the Tarot in creating this card.

The most blocked card to conceive of was the Seven of Wands. It is quite apt that the card that centers around the protection of creative ideas would be hard to create. I have noticed that focus on protecting creativity can stifle manifestation powers.

Is it possible to purchase Dark Days Tarot outside the US?

Inspired to create her way out of complacency surrounding a wary political climate, Wren McMurdo published the Dark Days Tarot deck in late 2016. This deck is inspired by the dark side of the lunar cycle, when gravity and tide unearth deeper truths. Wren has studied art and the metaphysical world for as long as she can remember.